Posted on Tuesday, August 20, 2019
Lufkin, TX (August 22, 2019) –   An all new Brookshire Brothers is coming soon to Aggieland!  The Lufkin-based grocer is opening a new store not just in College Station, but adjacent to the campus of Texas A&M University.  It’s an initiative between the Texas A&M System and the East Texas grocer. 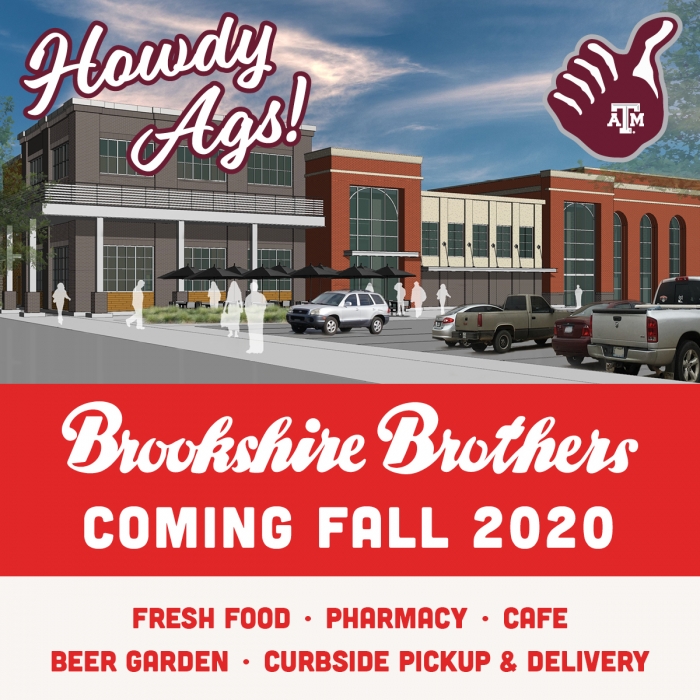 In making the announcement on Thursday, Brookshire Brothers President and CEO John Alston said, “Our company is honored to have been selected by the Texas A&M System to partner in their latest development project.  After visiting with the Evaluation Committee and learning about their vision, there was no question that the project was a high priority for us.”
The store will sit on land owned by the Texas A&M System and leased to Brookshire Brothers.
“I am proud to enter into a partnership with Brookshire Brothers to bring high-quality products and delicious food to the West Campus community,” Chancellor Sharp said. “Young Aggies undoubtedly will embrace their new community grocer and deli.”
Brookshire Brothers breaks ground on the new location Thursday, August 22nd at 10AM near the corner of George Bush Drive and Penberthy Boulevard. The location is ideally situated near student housing and in plain view of two iconic campus landmarks Kyle Field and Reed Arena.  Much like Texas A&M University, this community-centric grocer, is steeped in tradition that begins with service.  The new store will serve the students and faculty as well as the tens of thousands of locals and visitors who spend time in and around the University.
Brookshire Brothers’ Alston went on to say, “Ties to Texas A&M run deep throughout our company. As a former student and graduate of the Mays College of Business, I’m beyond excited for Brookshire Brothers to have the opportunity to serve students, faculty and staff of Texas A&M and the rapidly growing population around West Campus.”
In its 40,000 square foot space, Brookshire Brothers will bring its signature hot deli and fresh offerings to its new location as well as online shopping with curbside pickup and delivery, fuel and a bakery.  An expanded health and wellness focus will include not only a full service pharmacy with personalized medication counseling, but also immunizations, and at-home testing for flu, UTIs, and strep.  In addition, the store will have a wide variety of nutritional supplements.
A feature company officials think will appeal to college students is the outdoor concert venue with both beer on tap and wine by the glass.  The company has a similar music venue at its Canyon Lake, Texas location which is popular with both visitors and locals.
Brookshire Brothers is a company of 5500 employee owners who are known for their personal service and commitment to the communities they serve.
For more company information, view other recent press releases.
Tags
Press Release
company
news
new feature
College Station