According to spokeswoman Sally Alvis, plans are also in store for Wells.

“We’ve purchased property and plan to build an Express store with a greater variety of fresh and core grocery items to meet the needs of our shoppers in that area,” Alvis said. “Our plans are that the store will complement, not replace, our current Polk convenience store.” Long-term plans, according to Alvis, call for the replacement of the Central store, across from the Lufkin State Supported Living Center, with an expanded Express format and continued operation of the Central Heights store, north of Nacogdoches, under its current format for the foreseeable future.

“We identify markets and communities that are basically in food deserts,” Alvis said. “A lot of them might not warrant a full-size grocery store, but they do need fresh produce, fresh meat and a wider variety of fresh baked foods. That’s ideal for an Express format.”

She said there was no time line as of yet for the Wells and Central locations.

As far as the company’s headquarters, Chief Operating Officer John Alston said Lufkin remains an ideal location from both a geographic and cultural standpoint.

“We consider Lufkin to be a good strategic location from which to coordinate our existing and future operations from a supply and distribution standpoint,” Alston said.

“We have our core infrastructure in place here and look forward to our longterm presence. Lufkin is fortunate to have had a history of innovative leaders with a passion for making this a great place to live and do business and we’re proud to have been a part of that for the past 95 years.”

Employees in Angelina and Nacogdoches counties number about 1,291 people, about 20 percent of the company’s workforce.

Officials with Brookshire Brothers got a Hill Country welcome as the company opened a location in Canyon Lake, an unincorporated retirement community near New Braunfels, in February.

In addition to the usual options, the 34,000-square-foot location also brings extensive wine and beer offerings to the region.

The store is “green and clean,” featuring dark sky-compliant lighting, reclaimed wood fixtures and daylight harvesting. The store’s Canyon Lake Cafe has a piece of the Canyon Lake High School gym’s sideline hanging on the wall as well as a rotating exhibit of student and community art.

A bar on site will serve Texas craft beer on tap. Wine by the glass will also be available with happy hour specials and featured wine and beer samplings. 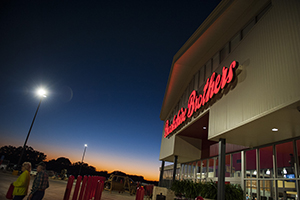