Posted on Wednesday, October 30, 2013
A Groveton woman says she felt like she was playing The Wheel of Fortune when she found out she'd won the top prize in aBrookshire Brothers'contest.
Brookshire Brothers ran its Summer of Fun Giveaway from May until Labor Day this year.  Customers in the company's 78 stores picked up game cards and tickets whenever they shopped and had the option to also play an on-line version of the game.
Groveton's Deborah Wilson did both and it paid off…in spades!  On Tuesday, October 22nd, Brookshire Brothers representatives met Wilson at the B & B Foods in Groveton where she shops and handed over a $100,000.00 check.  Store Director Kyle Joseph said, "I am so glad it was someone in our community who won.  It means so much to the people of Groveton. Mrs. Wilson is living proof that you've got to play to win!" 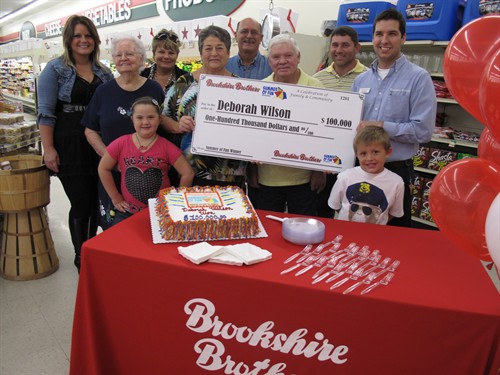 Wilson, a Groveton native, has worked for the school district for 27 years where she is the Child Nutrition Director.  She says her family keeps asking, "Are you really sure?"
Brookshire Brothers invited its customers to play theSummer of Fungame to add some excitement to their shopping experience during the hot summer months. Not only did the customers play, but the employee-owners played their own version of the game.  Onalaska Store Director Patti Spurlock won a $25,000.00 boat!
There are other big winners company wide!  Mildred Simmons, who shops at the DeRidder, Louisiana store, won $10,000.00 and there were also multiple $5,000.00 winners.
The company's Chief Operating Officer John Alston says, "It is an excellent way for our customers company-wide to have a chance to win cash, prizes and product. It also affirms that our small town operations are just as important to and as viable as our stores in our larger cities.  We are thrilled for all of our winners, but especially Mrs. Wilson and all of our loyal shoppers in Groveton, TX.
Tags
Contests
Summer of Fun