Valentine's Day Shopping can be frightful, but getting cozy with your S.O. can be oh-so-delightful! If you find yourself empty-handed on Valentine's Day, heat things up on your own terms with these sizzling ways to warm their heart.

Build a Blanket Fort
When is the last time you’ve done something this fun and carefree? Go all out with mountains of blankets and plush pillows to create your own cuddle-worthy hideaway. If you really want to go the extra step, take candles with you and create a warm and cozy space to treat both of you!

Steamy Bubble Bath
Take a dip together in a piping hot bath drawn with calming bubbles and plenty of mood-setting candles. Don’t forget to throw in some equally mood-setting Ménage à Trois Silk!

Wine & Dine
We've all heard the quickest way to a man's heart is through his stomach, but it doesn't stop with the men! Everyone likes to feel special with a homecooked meal and a nice glass of wine.

Never underestimate the power of a simple, but thoughtful Valentine's Day celebration! 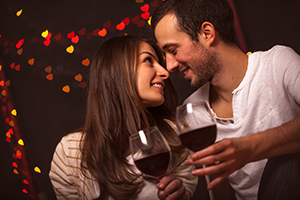 Celebrate New Year's Eve without a lot of fuss! Gather friends and neighbors for a warm, cozy evening inside, or go outdoors if you're an active group. You'll find all the recipes and party-planning tips you'll need for an appetizer and dessert celebration to ring in this new year. 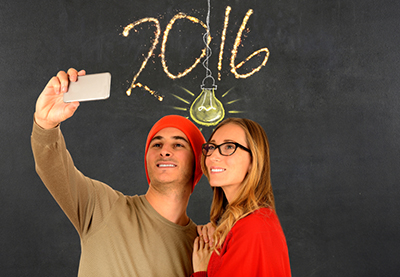 Casual get-togethers are often impromptu and require no special decorations. If you want to decorate, consider one of these:

Brunch is one of life's great pleasures, or at least it can be if done properly. With the right mix of food, drinks, and of course friends, it's possible to make brunch an epic experience. Whether you're looking for a spot in the streets of Houston or prepping for breakfast on a lake-front property – Read on and learn how to brunch like a boss. 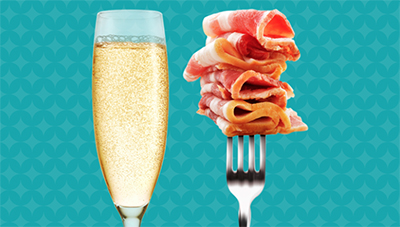 Since you've found your way to this blog, I hope you know about this classic cocktail. In case you need a refresher, it's easy. A mimosa is simply equal parts champagne and orange juice.

If you have trouble remembering that, then just remember this: Mix Andre and OJ. Easy, right?

What's brunch without eggs? Let's not even think about a world without them.

Various egg dishes are a lock to help balance out any acidity from a breakfast cocktail. Frittatas are an egg based dish that helps class up your brunch to the next level.

Want to give it a shot? Just mix your eggs with anything tasty in the fridge, heat in a pan, and serve when there's just a little bit of jiggle left in the 'ttata.

Add some sharp cheese to kick the savory factor up a notch.

Talk about balance. You really can't beat the salty, savory flavors of a good piece of bacon mixed with the protein kick from your eggs.

Fried to a crisp, or cooked just well enough. Bacon is the, without question, the perfect breakfast food. (In my opinion, but really, come on. You know it's true.)

Finish up with a sip of that mimosa and you have entered brunch paradise.

This might sound crazy, but adding a little champagne to your French toast or pancake mix injects an extra dose of deliciousness.

Pro tip: whisk in the champagne with the eggs, and then add the dry ingredients.

Presto, your breakfast just got fancy.

Looking to take this epic brunch to the next, next, level? Don't write off salmon as a menu option.

Champagne has always made fast friends with seafood, and brunch is no exception.

Try pairing your bubbly with a little smoked salmon on either a bagel or within an omelet, and you'll feel like you're at a five star hotel instead of on your couch's four cushions.

Feed 4 for just $4 each! Visit your local deli for your next family dinner! 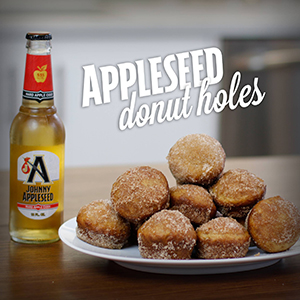 Start by simmering the Johnny Appleseed with the 2 cloves in a small saucepan over medium heat for 15-20 minutes until the apple cider reduces down to ½ cup. Remove the cloves from the concentrate and pour the Johnny Appleseed into a container and refrigerate while you prepare the donut batter.

Position a rack in the center of the oven and preheat the oven to 350 degrees F. Spray a mini muffin pan with non-stick cooking spray and set aside.

In a large bowl, Mix together the flour, baking powder, baking soda, cinnamon and salt, set aside. In a medium bowl, combine the egg, melted butter, and brown sugar, whisk until smooth (the smoother this is, the fluffier the donut holes!) Then, add in the apple sauce, vanilla, buttermilk, and the refrigerated Johnny Appleseed concentrate.

Add the wet ingredients to the dry ingredients and whisk until just well-combined. Pour the batter by the teaspoon into the prepared muffin pans about ¾s of the way full. Make sure to not overfill. Bake the donut holes for 9-11 minutes.

In a medium bowl, combine the sugar and cinnamon together. Dip the tops of each donut hole into the melted butter then coat with the cinnamon sugar mixture. Repeat with all the donut holes. Depending on how long you dip the donuts into the butter, you may need more butter and/or more cinnamon sugar.

This salty-sweet mix has all the highlights of happy hour: popcorn, pretzels, cocktail peanuts and beer. 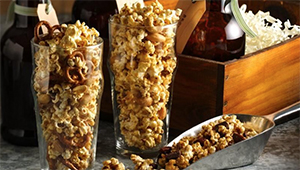 In a medium saucepan, combine sugar and Cupcake Vineyards Black Forest and bring to a boil over medium heat. Add the remaining ingredients and bring the mixture back to a boil. Reduce heat and simmer for 10-15 minutes, stirring often. 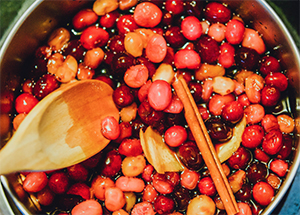 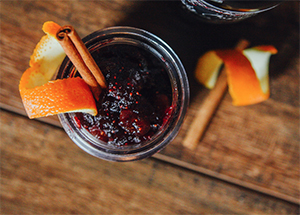 To continue the efforts this year, we are asking you to share how much you care by posting your Sutter Home wine selfie through Twitter, Instagram or Facebook. Just remember to tag it #sutterhomeforhope and make your posts public so Sutter Home can capture them.

By partnering with National Breast Cancer Foundation, the Sutter Home goal is to provide women with early detection, education and support service, while inspiring hope. 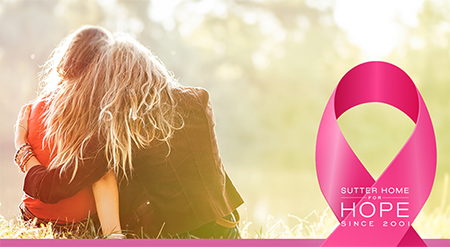 Red or white? Short or tall? Thin or wide? Bubbly or not? All questions to think about when serving your next glass of wine. Read up on this guide to stemware! 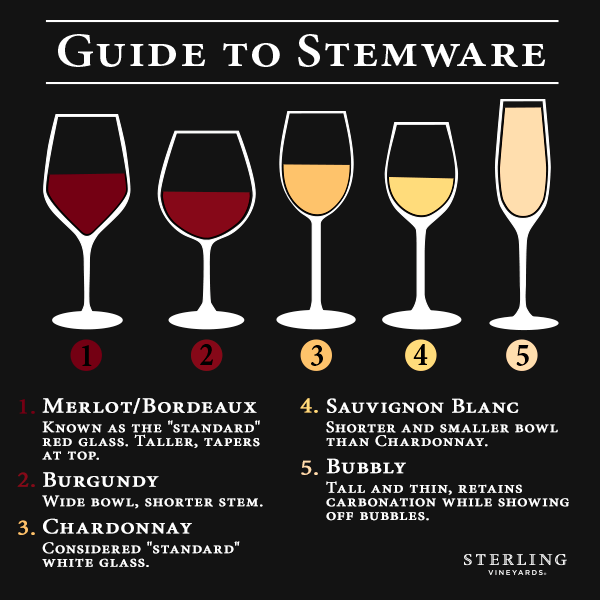 Good beer is back with a vengeance! Thanks to the craft beer explosion, now is the perfect time to reintroduce yourself to beer.

Today there are more breweries in the United States than at any time since the late 19th Century, with many more still to come. The brews they are crafting have as much complexity as the world’s best wines, if not more so.

Here are the basics for enjoying your next cold one!

Beer is made of four basic ingredients. Each of these ingredients contributes flavor and aroma of beer: malt, yeast, hops, and water. 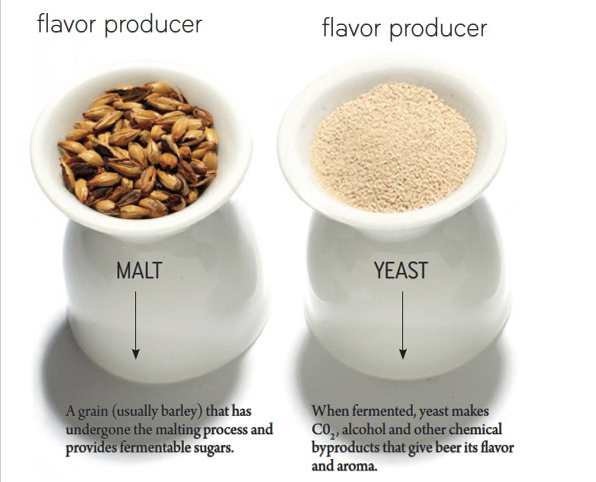 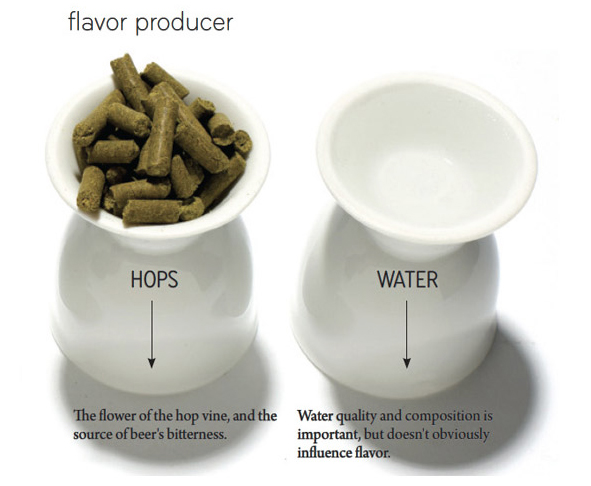 Every beer displays the character of all these ingredients to lesser or greater degrees. Beer styles are determined by the intensity of each ingredient relative to the others.

Some beers are heavier in malt, which we cicerones (the beer equivalent to a sommelier to wine) call malt forward. Others showcase hops (known as hoppy beers) or yeast (which we call yeast forward). 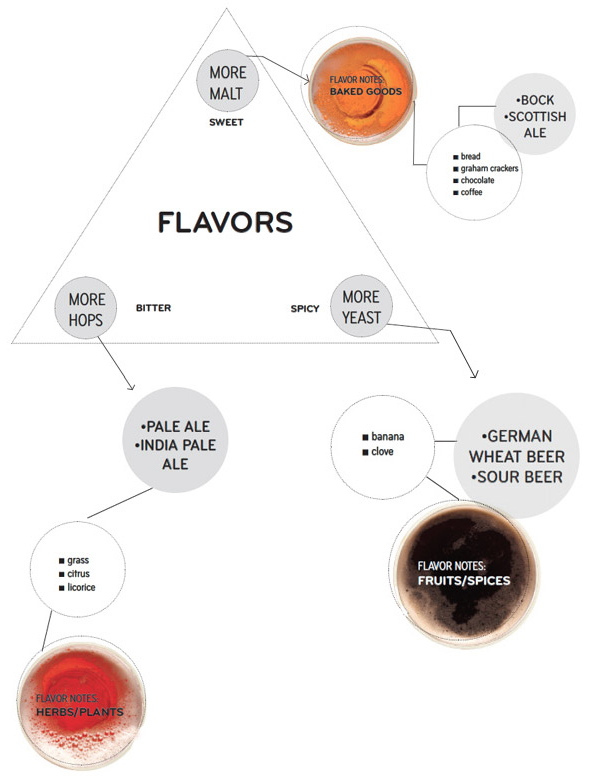 There millions of combinations of these ingredients. Add spices, honey, fruit, or any of the other additional tools in the brewer’s kit and the possibilities for creating unique beer flavors are literally endless.

It is generally agreed that there are two broad subcategories of beer, ale and lager. The main difference between the two is the type of yeast used to ferment them.

Ale yeasts ferment at warmer temperatures (between 60 and 75°F) compared to the colder fermentation temps of lager yeasts (45 to 55°F).

The warmer fermentation of ale promotes the production of flavor and aromatic compounds, while the colder lager fermentation inhibits them. This is why lagers tend to have a crisper cleaner profile and ales are more fruity and spicy in flavor. Beyond these differences associated with yeast, the full range of beer flavors is available to both ales and lagers.

Beyond Light to Dark

Beer styles fall on a spectrum of flavor intensity from lighter to stronger.

Many think that flavor intensity corresponds to color: Light colored beers are light and darker beers are heavy. Wrong! Color really tells you little about the intensity of flavor in a beer.

A Belgian tripel looks very much like a pilsner, but 9% alcohol and the funky flavors of Belgian yeast make it significantly more intense. The black lagers of Germany are as dark as coffee, but drink more like a pilsner than a stout, with just a dash of roast.

Blond ales and golden lagers like pilsners fall on the lighter end of the scale. At the other end you find the big and brawny barley wines and imperial stouts, along with the tart and funky Belgian sour beers.  Beers at this end tend to be higher in alcohol, but that’s not always the case.

In between, beers run up the scale from the luscious, caramel-tinged amber and Scottish ales to brightly bitter pale ales and rich, roasty porters and stouts.

Ice cold is how Americans like their beer, but American-style lagers aside, that is not the best way to enjoy a finely crafted brew. Why?

The colder something is, the less you can taste it. And that includes beer!

The deep-freeze numbs your taste buds. When beer gets too cold the malty goodness disappears. Hop bitterness becomes more intense, harsh and unpleasant. To keep the correct balance, drink your lager beers at around 48°F and your ales at “cellar temperature,” around 55°F. 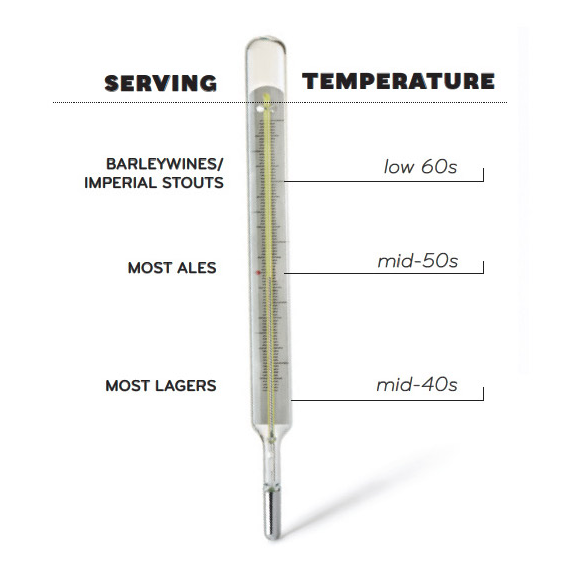 Glass, Bottle, or Can?

Finally, be sure to pour that beer into a glass. Most of what we taste actually comes from what we smell. If you drink straight from the can or bottle you can’t smell anything. You’re cutting yourself off from three-quarters of the total beer experience.

A simple pint glass is fine for most beers, although a tulip glass or snifter will better serve those high-alcohol and highly aromatic beers like barley wines and Belgians.